The Ancient Mediterranean World: From the Stone Age to A.D. 600 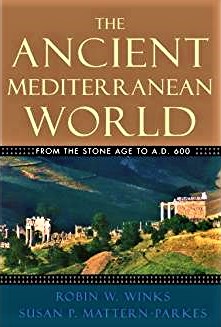 Homo erectus, an upright fellow, showed up during the Pleistocene about 2 million years ago and quickly dispersed throughout Asia and Africa even though his starting point is ambiguous. After mucking about the tropics, the lack of clothes makes it difficult to take skiing vacations in the Alps, decided to take on a bigger brain and chin with less eye brow protuberance, and developed into our mum: Homo sapiens, a couple of hundred thousand years ago.  Some say we came from east Africa, others say east Asia but regardless of our origins we showed up in what is now Israel around 100,000 years ago and our quest for ever larger cell phone screens and civilized table manners had begun.

Agriculture, originating about the 12th century B.C., traces its roots back to the fertile crescent; beginning at the Jordan River progressing north and northeast to the headwaters of the Euphrates and Tigris Rivers and then back down south to the rivers’ marshlands, eventually pouring into the Persian Gulf.  By 9500 B.C. man was cultivating wheat, flax, rye, peas, and other crops that brokered the way for cities, government, laws, and taxes; otherwise known as civilization.

The earliest civilizations are conveniently timed to the discovery of bronze around 2500 B.C.  Bronze tools and weapons, an amalgam of copper and tin, galvanized the rise of city-states and empires until the tin ran out in 1200 B.C., then the Dark Ages set in. Virtually every major city in the eastern Mediterranean was sacked and burned during the first 50 years of the advent of these interesting times, many to disappear from the map forever. The technology to smelt carbon steel brought a renewal of civilization during the Iron Age and the cementing of the Assyrian Empire–for awhile.

By the end of the Iron Age the bright lights of civilization have shifted from Mesopotamia to the northern shores of the Mediterranean; first settling into the Aegean peninsula around the 8th century B.C. before migrating to Rome in the 3rd century B.C.  By the 3rd century A.D. Rome was a spent force and the remnants of the empire shifted back to the eastern Mediterranean in Constantinople.

Christianity’s rise followed Rome’s decline through the Mediterranean. The rapid spread of Christianity is somewhat of enigma, as are other philosophies or religions such as Buddhism and Islam, but the prevailing thoughts are that church improved the lives of its followers and promised a way to life every after.

The authors, Drs Winks and Mattern-Parkes, professors of history at Yale and the University of Georgia respectively, have written a short history of the region that engrosses and enlightens without preaching.  If interested in the history of the Mediterranean from the Stone Age to Islam, this is quick read and is eminently readable.