Madeira from Island of Madeira, Portugal

The islands of Madeira, in the eastern, middle Atlantic Ocean, approximately 550 miles WSW of Casablanca, were likely known to seafaring civilizations before the time of Christ, to the Romans from at least to the 1st century AD, to the Vikings in the 10th century, and the English in the 14th century but were not permanently settled until the 15th century by the Portuguese. Almost from the beginning of the Portuguese settlement, sugarcane and grapes became important export crops for the islands.  Wine slowly became the dominant crop after the sugar industry shifted from the islands to Brazil in the 17th century.

Production and export of the wine from the islands date back to the 15th century but the earliest shipments spoiled in the ship’s baking-hot holds as they crossed the Atlantic on their way to the new world. To counter the spoilage, a small amount of sugarcane derived spirits were added to the wine to stabilize it. The added spirits along with the intense heat in the ship’s holds caused the wine to transform into a fortified, dry to sweet liquid that became the preferred wine in the new world.  Later when the sugar industry left the islands, brandy was added to wine instead of alcohol derived from sugar. Madeira wine was a mistake, but what a wonderful mistake.

The Leacock name, associated with the Island of Madeira, dates back to John Leacock’s arrival on the island, from England, in 1741. By the late 1750’s John, along with several partners were producing wine on the island. In the 19th century Thomas Sapp Leacock was instrumental in saving the island’s vineyards from Phylloxera. He initially applied a potion of resin and turpentine but this was expensive and subsequently he was one of the first to realize that American rootstocks were resistant to Phylloxera. In 1925 the Leacock business was merged, due to financial difficulties, with Blandy and they formed the Madeira Wine Company. Today the Blandy family owns the majority interest, and they run the company, producing 4 major brands: Blandy, Cossart Gordon, Leacock and Miles.

The Tinto Negra Mole grape is used to produce this wine.  It is a thick-skinned red grape variety that accounts for about 80% of island’s vineyards, arranged in steep terraces around the central mountain, growing in rich volcanic soils.  This grape, for the dryer wines only, is not subjected to maceration. The wines, once fortified, are heated to 113 degrees Fahrenheit for 4 months after which the wine is aged in oak casts for several years while the temperature is slowly reduced. Because the wine is fortified it will last indefinitely, opened or unopened.

This Rainwater variety is a lighter and sweeter version of dry Madeira. This wine produces a smoky and nutty fragrance with a sweet, dry, fruity and buttery finish.

A good dessert wine. Serve lightly chilled, as an aperitif, or with strong cheeses.

Other Dessert from Douro Valley, Portugal

Quinta do Noval is one of the oldest, and without argument, one of the greatest port houses in the Douro River Valley of northern Portugal. Their greatness is due, in part, to their willingness to experiment and innovate with their vineyards and products. They were the first, in 1958, to introduce late bottled vintage port with a 1954 vintage. Robert Parker included this winery in his 2005 book The World’s Greatest Wine Estates; speaking highly of its vineyards and wines:

Established in 1715, the vineyards, which the wines take their name, have only had 3 owners in 302 years. The current owner, AXA Millesimes, purchased the property in 1993.  The ports all come from a single vineyard planted with 7 classified A grape varieties:  Touriga Nacional, Touriga Franca, Tinta Roriz, Tinto Cão, Tinta Barroca, Tinta Francisca, Sousão. The exact grape(s) used in this port remains unstated.

The 350 acres of vineyards, 250 acres of which have been replanted since 1994, are 300-1500 feet above sea level, on the terraced hills, rooted in a medium grade metamorphic schistose rock with a little weathered clay thrown in to keep it all from cascading down into the river below. (Another great example of great wine grown from inhospitable and infertile soils.) The growing season days are mild with temperatures reaching into the mid-70s with night time lows bottoming out around 50 degrees Fahrenheit. Rain is plentiful, averaging 3-6 inches per month.

The grapes are hand picked, crushed by foot and aged in single vintage, wooden vats for 4-5 years before being bottled; producing a deep purple to almost black hue with sweet aromas and flavors of nuts, toffee and vanilla.  Enjoy alone or with chocolate.

An outstanding port. Decant to remove any sediment. 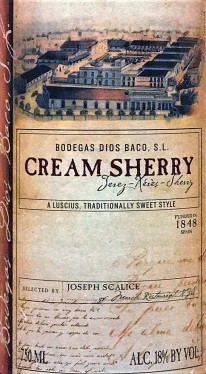 Bodegas Dios Baco, “The God Bacchus Winery”, dates back to the late 1700s, changing ownership many times over the centuries, eventually being acquired by Jose Paez Morilla in 1992.

This present winery was built in 1848, and was originally part of “The Twelve Disciples”, but today, only 3 remain; Dios Baco plus the Bodegas la Cruz and Pio XII, located in Jerez de la Frontera, Spain, less than 10 miles northeast of the Bay of Cadiz.

The vines grow on the open rolling hills, from a chalky soil with the calcium content ranging from 30 to 100%, baking in the mid-year southern Spanish, cloudless skies with temperatures commonly going past 100 degrees with very little, quenching and cooling rain.  The palomino and Pedro Ximenez white grapes thrive in this climate by thrusting their roots deep into soil in search of any remnants of the plentiful autumn and spring rains, striving to survive the rigors of the dry, hot growing season.

This wine has a beautiful clear, mahogany-amber hue, powerful sweet aromas of dried fruit, sweet, deliciously thick and mild, with a begging for more finish. Pair this wine with strong soft cheese and fruit.