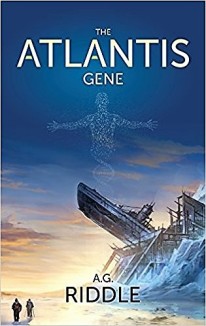 All Written by:  A.G. Riddle

Science Fiction is replete with original, creative and amazing stories of the future and future’s past; Herbert’s feudal future checked by a hulking nematode in his Dune series; Asimov’s stories of future doom and mitigation in the Foundation series; Card’s tales of adolescent potency and adult deception in his Ender’s series. Riddle

‘s Origin Mystery trilogy is not one of these original and creative stories.

The trilogy explores an alternate history of mans origins, portending a simple plot of who controls who and for what purpose, but quickly gets lost in extraneous details and insignificant sub-plots.  Reading Riddle is the printed expression of ADHD, character development is stunted and dribbled out in brief disconnected chapters that come back together eventually, after they have slipped from your memory, only to bifurcate again; sub-plots within sub-plots within plots, tentacles going everywhere and nowhere, impulsively going off on tangents to explore another unnecessary point. 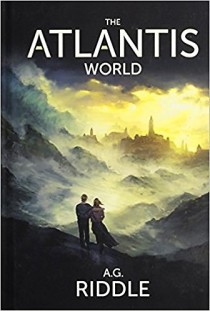 Originality and gifted writing does not live in this book.  Most of the topics and plots have been done before and usually better. Dialog and narrative are 1 and 2 dimensional.

…Dorian rushed forward and struck Ares, killing him in one blow. The Atlantean hadn’t expected it, and Dorian fought like a feral animal with nothing to lose.

Striking one blow and fighting like a feral animal are not congruent actions.

Occasional changing up the verbs keeps the monotony away and Live Die Repeat, the movie, already did this scene – creatively better.

Steven King’s greatest achievement, The Dark Tower series is a captivating and deliciously fun 5000 pages of dystopian fantasy that will go down as one of literatures greatest creative endeavors. The punitive sin in the entire series was the creation, the introduction of a new character, Patrick, the destroyer of Mordred, in the last 100 pages of the series, solving King’s plot dilemma with an eraser.  Riddle pulls the same amateurish stunt towards the final chapters of his trilogy, introducing the god-like Sentinels, a deceitful writing ploy, but thankfully it euthanized the tale.

Riddle should have kept this to a single volume, forcing a simpler, crisper plot line.

Puns, discovered on eon old Sumerian cuneiform writings, are some of the oldest forms of humor known to man. Humor does not get any lower than a pun. To pun is to groan. I do love puns.

A fleeting and final dose of groans from the 2017 O. Henry Pun Off winner, Southpaw Jones:

Tomorrow’s Mother’s day, so give me a wide birth from this gestation, period. Not to bore children, crown around, or stirrup trouble, but to breech a little spermon induce labor-ious minutes for my mom and all Lamaze newborn not. I’m gonna trimester to come to term with it all, but I’m tearing up already. Mom, thank you for giving me womb to grow, for halloweening, for a family of huggers & huggies, for protesting any sign that cesarean section, for soup when I had a cough. You didn’t just cervix. For the what do you colicky to the door of life’s intercourse that fallopian tube be walked through. You managed to fetus on coo & fundus too, made sure my heart had love and lactate, pushed me to gamete my obligations, spit up straight, egg cell in school where I’d stretch marks as high as onesies. We went to church for maternal soul the grand canyon. That time engorgement so much kayaking. I had faith in utero me to shore. Now, as zygote through life, uterus-t me to live the values you placenta me. What to kn-OBGYN the world am I a letdown? Embryo-iled in crime. I know what it sounds like when a hormones. It was a centimeter and my athlete friend, I sold hemorrhoids. I feel like a real heel prick when we fight. It’s like a doula something, but if I umbilical cord-ially, I know you’ll VBAC on my side. I know lots of parents diaper season, but I object! Permanence, please! I don’t wanna feel that morning sickness. So live long and dilate. There’s a postpartum. Oh! And a mother thing. I love you, Mom!

Arthur C. Clarke, or imposing proper reverence, Sir Arthur C. Clarke, was an avowed atheist, dancing, contradictory, with the concept of God through all his great works; notably Childhood’s End, 2001: A Space Odyssey, 2010: Odyssey 2, 2061: Odyssey 3, and 3001: The Final Odyssey. At times he was adamant about his beliefs, “I don’t believe in God or an afterlife”; and on other occasions absolutely flippant, “Any path to knowledge is a path to God—or Reality, whichever word one prefers to use.”; which is remarkably similar to his third law; any sufficiently advanced technology is indistinguishable from magic.

His chosen god-given paradise was that of an evolutionary, transcendent transformation to a higher order; not necessarily a gift from an omniscient being but that certainly is a conceivable end point of several of his utopian narratives.

Childhood’s End begins with humans not worthy of traveling further into that celestial ether but our progeny are trainable to receive that gift. Earth is taken over by a race of space aliens known as the Overlords, that have come to suppress our worst instincts and desires, prepare and guide us, towards the enlightenment of the Overmind.

Childhood’s End is considered Clarke’s greatest novel and he certainly thought it his best, and it definitely sent him on a trajectory to further explore concepts of transcendence in later works culminating in his hugely successful Space Odyssey series.

Life it seems, will fade away
Drifting further every day
…
Deathly lost, this can’t be real
Cannot stand this hell I feel

When there are no heroes, no good guys, no morals worth fighting for, then you’ve walked into The Big Nowhere.  There are no prizes here so Sam Spade took the night train out of L.A., and Mike Hammer’s 45 would have melted by the 9th chapter, leaving a rather skinny book with a sloppy ending. No one, no thing is redeemable in this novel, possibly not even the reader, who is captivated, disheartened, engrossed, disgusted on the raw truth presented as living without a soul, trying to make sense of this hell on earth, wishing never to come anywhere near The Big Nowhere.

…thinking Coleman’s Upshaw fixation would break him down on his homosexuality, stymie and stalemate him.  He was wrong. Coleman picked up Augie Duarte at a downtown bar, sedated him and took him to an abandoned garage in Lincoln Heights.  He strangled him and hacked him and ate him and emasculated him like Daddy and the others had tried to do to him…

Everyone deserves to die, sooner rather than later, in this l.a. l.a. land; the protagonists, if there are any, the antagonists, the groupies, the followers and the hanger-ons, everyone.

The Big Nowhere is the second, and likely the best, of Ellroy’s L.A. Quartet which includes:

Don’t miss this one. 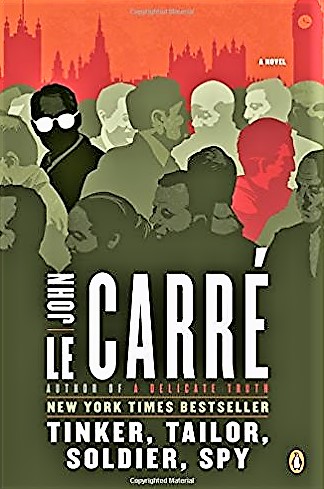 Published by: Alfred A. Knopf Incorporated

David John Moore Cornwell, alias John le Carré, a son of a con-man, whose father was a sometimes Rich Man, Poor Man; worked for British Intelligence in the 1950s and 1960s but was betrayed in 1964 to the Russians by Kim Philby, a British KGB double agent working within the MI6.

Tinker, Tailor, Soldier, Spy is the fictionalized tale of the hunt for Philby, nom de guerre Gerald, by retired British spy, George Smiley. Smiley, the physical antithesis of James Bond; is an overweight, over the hill, myopic, failure in love; but intellectually superlative, standing shoulder to shoulder with Sherlock and Columbo.

The title of the book comes from a children’s counting rhyme that traces back to at least the late Renaissance:

John le Carré writes with heavy characterization to the point of distraction along with frequent time and space jumps that will often bewilder. The opening sentence “The truth is, if old Major Dover hadn’t dropped dead at Taunton races Jim would never have come to Thursgood’s at all.” is absolutely critical to the plot development but remains a complete mystery for most of the tale. Read carefully but do not tarry.