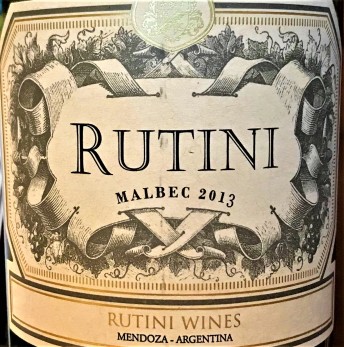 Felipe Rutini was born in 1866, into a winemaking family in the central Italian agricultural Province of Ascoli Piceno, which is less than 20 miles west of the Adriatic Sea. He graduated from the Royal School of Agriculture as an agricultural technician in the city of Ascoli Piceno. Disillusioned with the Italian unification and the constant wars in Europe, he made his way to Mendoza, Argentina at the young age of 18 and a year later founded the La Rural winery in the district of Coquimbito, currently located in the southeastern portion of the Mendoza metro area. People definitely made their mark earlier in life during the days of horses and steam.

His sons, after their father Felipe Rutini’s death in 1919, took over the winery and were the first to plant vineyards in the Uco Valley, around Tupungato, in the year of 1925. The winery eventually established two more vineyards in the southern portion of Uco Valley in the San Carlos Department. All 3 of these vineyards: Gualtallary, The Consultation, and The Altamira; totaling approximately 620 acres, are a source of grapes for this Malbec. In 1994, the Rutini winery and vineyards were sold to Argentinian investors including the wine makers: Nicolas Catena and Jose Benegas Lynch.

The vineyards are situated 3100 to 4100′ above sea level in the shadow of the Andes Mountains and the 21,500′ Tupungato volcano. The soils are well-drained, alluvial to colluvial, rocky sands to loams, one to four feet thick. Temperatures reach into the 80s during the growing season days and dip into the mid-50s at night.  Rain varies from 1 to 3.5 inches per month.

The grapes are manually harvested and the wine spends 12 months in new French and American oak barrels. Later vintages are stored in new and second use oak barrels.

It is a dark plum-colored wine with blackberry and earthy aromas. Huge tannins and shanghaied acidity produce a long grope of a finish. I drank a bottle of this wine several years ago and it was mediocre, plain and uninteresting, at best.  It has aged well in the bottle and exhibits a greater punch and grab now. Also it was about half the price a few years ago, re-enforcing the maxim: buy early, drink later. Serves well with red meat.

An outstanding wine. Decant and aerate for one hour before drinking.