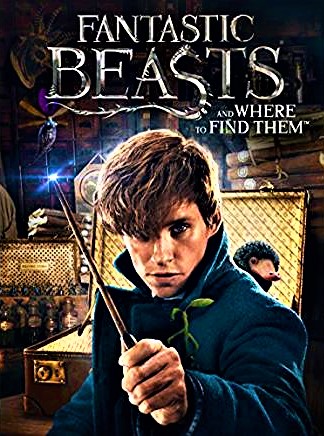 J.K. Rowling, in 2001, wrote and published a Hogwarts textbook, under the pseudonym of Newt Scamander, on the magical world of Fantastic Beasts and Where to Find Them; a slim encyclopedic volume of fictional animals that made up the enchanted universe of Harry Potter and his bewitched school chums.  The book, though imaginative, generally did not interest anyone much past age of 12, being just a compendium of beasts without any pretense of a story or plot, but it did spin-off this wonderful film, a charming tale of magic and adventure, 70 years before Harry Potter, in the streets of New York.

The movie opens with Newt Scamander (Eddie Redmayne) arriving in New York for a brief stopover before continuing onto Arizona to further his research into “Fantastic Beasts” but almost immediately has an itinerary change due to one of his creatures escaping from his improbably bottomless briefcase. Promptly the escaped beast goes on a hunt for anything shiny: usually solid gold, resulting in a hilarious wizard and beast chase through the streets and banks of New York.  Compounding Newt’s creature capturing problems is an anti-magical society trying to expose and eliminate all witches and wizards along with a controlling magical political hierarchy attempting to keep everything secret and under wraps, including the threat posed by impending arrival of arch-villain and dark wizard, Gellert Grindlewald (Johnny Depp).

David Yates, the director, and Rowling have put together a lively romp of fun through the magical world of New York, enhanced with exemplary acting by just about all involved.  J.K. Rowling continues to surprise her fans, including me, with the depth of her talent, by adroitly changing roles from an accomplished author to a novice, but never-the-less, a master producer and screenplay writer for this movie. I found this movie heads and lizard tails above the Harry Potter movies, mainly because Harry Potter’s sub-par acting was absent. Make time to see this entertaining film for itself, and ultimately, to keep you abreast of the likely sequels.