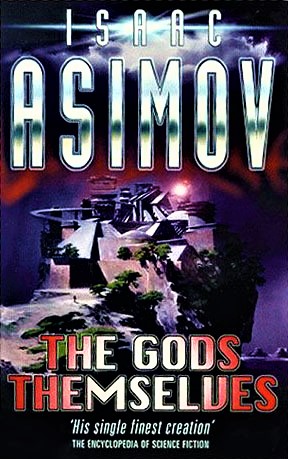 Copyright:  © 1972. (Originally published in the Galaxy Magazine and the World of If magazine in 3 installments.)

Even today, after reading, and re-reading, Asimov for almost 40 years, I still encounter a book by him that I haven’t heard of before, which is not too surprising since he wrote somewhere in the neighborhood of 500 books over his lifetime, and not surprisingly, the new finds always turn out to be very good reads. This book is a great read and one of his most interesting and original sci-fi stories.

In 1957 Asimov published The Naked Sun, his last original, adult sci-fi novel until 15 years later when The Gods Themselves was published in 1972. Asimov had lost his confidence in writing science fiction in the late 1950s, believing that the genre had passed him by, but fate and circumstance stepped in early in 1971, at a New York science fiction convention, to bring him roaring back to his natural calling and eager fans.

Asimov describes his inspiration and determination to write a new sci-fi novel in the introduction of a reprint:  A Dedication of Some Length to The Gods Themselves published by Easton Press in 1986:

…Then, on January 24, 1971 at a science fiction convention held in New York City, I was in the audience listening to Robert Silverberg and Lester del Rey carry on a public duologue on the subject of s.f.  In the course of this, Bob had occasion to refer to some chemical isotope — any chemical isotope — to make some point, and after a moment’s hesitation, said, “Plutonium-186.”

Naturally, when the duologue was over, I accosted Bob, in order to tell him (with considerable glee) that there was no such thing as plutonium-186 and could not be.  Bob did not, however, wilt under this demonstration of his scientific illiteracy but said stolidly, “So what!”

“So this,” said I. “Just to show you what real ingenuity is, I will write a story about Plutonium-186.”…

Having thrown down the gauntlet, Asimov sets out to produce a novel that the sci-fi community agrees is one of the best, and rightly so, original science fiction novels ever written, winning both the Nebula and Hugo Awards for that years best novel; a binary feat reserved for the crème de la crème of the genre’s writers.  Asimov, to add an exclamation point to the awards and his fan’s acclaim, states that this novel is his favorite work of fiction: quite a statement for such a prolific and successful writer.

In the 22nd century everyone is running out of energy, the Earth, red giants, the “Energizer Bunny”, parallel universes: everyone. In The Gods Themselves, a seemingly win-win solution comes from an alien world in a parallel universe; the exchange of mass between their universe and ours, due to the differences in the governing physical laws, creates unlimited and free energy. As usual, altruistic motives do not apply, and the exchange of matter, as it turns out, for the not-so-free energy, will cause the eventual, and uncomfortably soon, destruction of Earth.

The novel is divided into 3 parts; the first part is an Earth perspective with, as Asimov describes, a bluesy “downbeat”, a vision of an alien existence in the second part with another bluesy “downbeat”; and the 2nd part truly does contain some of the most original and imaginative sci-fi narrative ever written, and a third part described from the moon inhabitant’s viewpoint, ending the novel on a jazzy “upbeat”.  “A wonderful read, is The Gods Themselves” claims Yoda, draining the force of its negative energy.