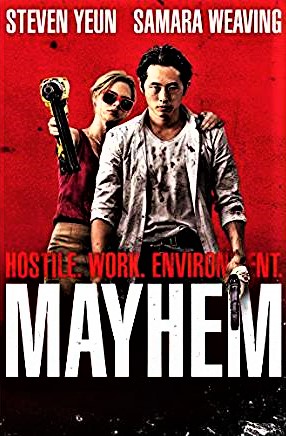 A law firm occupying a modern 9 floor glass and chrome high-rise is infected with a morality inhibiting virus, allowing all that are contaminated to pursue their criminal desires without remorse or retribution. Derek (Yeun), unjustly fired from his job at the firm, is infected with the virus and seeks revenge from the suits upstairs.  He teams up with Melanie (Weaving), a rejected client seeking aid from the firm. They attempt to reach the managing partners on the locked down 9th floor, all the while leaving death, destruction–mayhem in their wake.

Matias Caruso, generally a writer of shorts, scribbled out a screenplay that is shorn of all pretense of artistry, finding a vehicle in the form of a very unoriginal viral infection, that allows him to maximize violent, gory, artery pumping, bloody scenes with an occasional speck of gallows humor interspersed between the bodies, to give the audience time to lessen their laryngeal spasms.  The whole effort is rationalized as a satire on the modern hostile, bureaucratic office. Please.

The director, Joe Lynch, likely to live in the land of forgettable movies for a very long time, plays up the script to its maximum heights allowable, and that still wouldn’t scratch an earthworm’s belly. The voice over narrative is not just distracting, but poorly written and just plain awful. The scene selections and settings are amateurish; B movies are done better.

The acting is tongue-in-cheek throughout and I have yet to decide if that was intentional or not. Enough said.

The Game of Thrones or anything by Quentin Tarantino are likely exhibits number one through a very large integer for efficiently desensitizing the viewing public to gratuitous sex and graphic violence resulting in products that have little to do with art or entertainment. This movie lives in the dark shadows of GoT and Tarantino, badly going where it shouldn’t have. This movie is not art. This movie does not entertain. This movie does not tell a believable story.  This is a movie of gross violence, nudity and cheesy dialog, designed to shock and numb. Save your time, save your dime, don’t watch this movie.