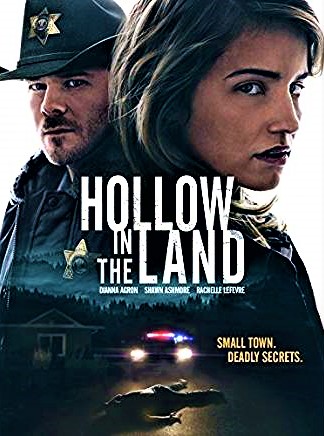 Alison Miller (Dianna Agron), a young woman, bereft of parents; mother dead, father serving time for drunken vehicular homicide, is desperately trying to keep her immature and obnoxious brother out of jail until he turns 18, all the while, working at a factory owned by the family of the young boy killed by her father. On the one-year anniversary of Alison’s father’s crime, her brother disappears after his girlfriend’s father is murdered. Alison begins trying to unravel mystery of her brothers whereabouts and the events that led to his suspicious disappearance.

Hollow in the Land was filmed in the small logging and mining community of Castlegar, British Columbia, home town to this movie’s director and writer: Scooter Corkle. The town is nestled in the valley at the confluence of the Columbia and Kootenay Rivers with the picturesque Selkirk Mountains towering above; sometimes referred to as a mountain hollow; pronounced holler if you are from West Virginia. Hollow also signifies the meaningless and pointless existence of the Millers, living as outcasts among small town hypocrites and cheats.

As a low-budget film, everything works except the story. It pulls all the right emotional strings, but intellectually it’s a beginning to end bust.  You watch the movie and just keep repeating to yourself: why, why does Alison do what she does?  A little thought shows a better way, a simpler plot with the same outcome, without traipsing down alleys and back roads, leading to the same place as the freeway. The movie starts out very slow with digressions that are simply insane and after 15 minutes of that goop, your mind tells you to get up and walk away.  If you stay it gets a little better and a little quicker, but just a little.

Some scenes should have been left on the cutting room floor, including a clip of Alison’s brother and his girlfriend swapping saliva, unconvincingly, for what feels like 20 excoriating minutes. A glancing blow of that scene would have been sufficient. The girl, moments after her father is murdered, is shown in an angelic, peaceful sleeping pose. Ain’t life wonderful? A few moments later the curtain opens, literally, to Alison and the girl’s mother, ex-wife of the murdered man, having a touching shower scene together. Made sense to someone.  Additionally, there are scenes and script that cause brain cells to scream out in anguish. Alison working for the family that lost their son due to the actions of her father. Why, why, why?  Alison playing amateur sleuth and never sharing anything with the police even though one of her few friends is a deputy.  Why, is never explained.

This is a flip of a coin movie. Heads watch it, tails, trim your toenails. As a mystery it is pretty good.  The process to the solution of the mystery is incoherent and the trips down the back roads are maddening.  Hollow may actually mean that the movie is insignificant and meaningless.