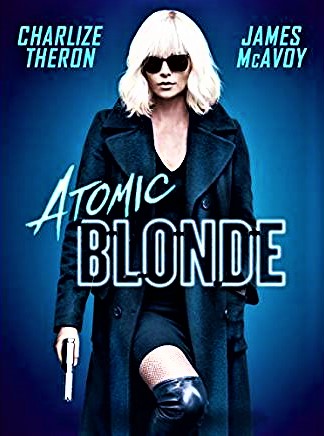 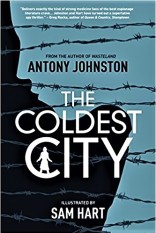 The novel and movie begin near the final gasps of communism in the late 20th century along with subsequent fall of the wall separating Berlin from East Berlin. A British spy, possessing a list of every spy playing spook in Berlin is killed and the list disappears. Lorraine Broughton (Theron), a British MI6 operative is brought in to recover the list, kick a few butts, possibly chase down a double agent, and segue with feminine ease through the twists and turns of this wonderfully sculpted action thriller.

Atomic Blonde is a British Bond flick without Bond.  A great romp of visual action worthy of Skyfall and a storyline that keeps you guessing for a good portion of the movie, although you should be able to put most of it together before the ending credits roll. Theron is simply superb in her role and was the spot-on, perfect actress to play the lead.  Goodman turns in a very solid performance as Theron’s foil, with his character providing enough twists in the narrative to totally mess up your plot assumptions.

A refreshing, fun movie of action and thrills with a screenplay that holds together to the very end.  Well worth seeing.  Expect a sequel in 2019 or more likely, a prequel, given that Antony Johnston has already published a graphic novel, The Coldest Winter, which takes the spies and their craft back to a slightly earlier time; to a Berlin of snowy cold, and the cold war of the early 1980s.