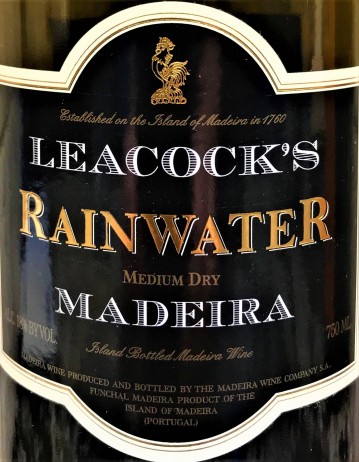 Madeira from Island of Madeira, Portugal

The islands of Madeira, in the eastern, middle Atlantic Ocean, approximately 550 miles WSW of Casablanca, were likely known to seafaring civilizations before the time of Christ, to the Romans from at least to the 1st century AD, to the Vikings in the 10th century, and the English in the 14th century but were not permanently settled until the 15th century by the Portuguese. Almost from the beginning of the Portuguese settlement, sugarcane and grapes became important export crops for the islands.  Wine slowly became the dominant crop after the sugar industry shifted from the islands to Brazil in the 17th century.

Production and export of the wine from the islands date back to the 15th century but the earliest shipments spoiled in the ship’s baking-hot holds as they crossed the Atlantic on their way to the new world. To counter the spoilage, a small amount of sugarcane derived spirits were added to the wine to stabilize it. The added spirits along with the intense heat in the ship’s holds caused the wine to transform into a fortified, dry to sweet liquid that became the preferred wine in the new world.  Later when the sugar industry left the islands, brandy was added to wine instead of alcohol derived from sugar. Madeira wine was a mistake, but what a wonderful mistake.

The Leacock name, associated with the Island of Madeira, dates back to John Leacock’s arrival on the island, from England, in 1741. By the late 1750’s John, along with several partners were producing wine on the island. In the 19th century Thomas Sapp Leacock was instrumental in saving the island’s vineyards from Phylloxera. He initially applied a potion of resin and turpentine but this was expensive and subsequently he was one of the first to realize that American rootstocks were resistant to Phylloxera. In 1925 the Leacock business was merged, due to financial difficulties, with Blandy and they formed the Madeira Wine Company. Today the Blandy family owns the majority interest, and they run the company, producing 4 major brands: Blandy, Cossart Gordon, Leacock and Miles.

The Tinto Negra Mole grape is used to produce this wine.  It is a thick-skinned red grape variety that accounts for about 80% of island’s vineyards, arranged in steep terraces around the central mountain, growing in rich volcanic soils.  This grape, for the dryer wines only, is not subjected to maceration. The wines, once fortified, are heated to 113 degrees Fahrenheit for 4 months after which the wine is aged in oak casts for several years while the temperature is slowly reduced. Because the wine is fortified it will last indefinitely, opened or unopened.

This Rainwater variety is a lighter and sweeter version of dry Madeira. This wine produces a smoky and nutty fragrance with a sweet, dry, fruity and buttery finish.

A good dessert wine. Serve lightly chilled, as an aperitif, or with strong cheeses.