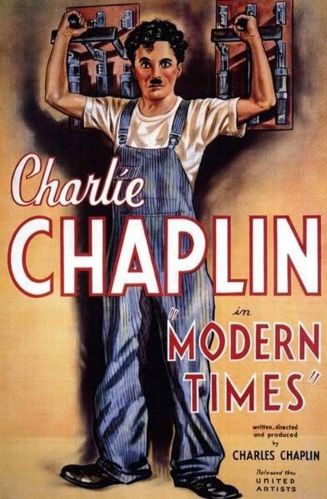 Charlie Chaplin as the Little Tramp, humorously battles modern life in the depression years of the 1930s, and he repeatedly loses. In his never-ending quest for survival he splits his time between failing his employers, getting fired, getting arrested, and spending time in the local jail. Coming off one escapade he discovers and falls in love with the beautiful gamin, Goddard; the dual together accelerate the tempo of absurd slap-stick into overdrive.

Silent films, after the technical hurdles of film, camera, and projector were overcome, became a full-fledged art form beginning in the mid-1890s and lasting until the late 1920s.  The early 20th century saw the art form generate almost all the genres that we know today, along with the experimentation and perfection of close-ups, long shots, and panning.  Contrary  to popular belief the technical quality of these early films was generally very good and the use of color in the 1920s was common. What wasn’t good was their preservation; by some estimates almost 70% of all silent films are forever lost. True silent movies incorporated live music at the theater, giving employment to thousands of musicians and the coming ‘talkies’ laid them all off.  Progress always has a price. The beginning of the end for silent movies occurred when Warner Brothers released The Jazz Singer in 1927, squeezing out silent films in a few short years afterward.

This is Chaplin’s last ‘silent’ movie, although audible music, song, and voice are interspersed with pantomime and title cards throughout the movie. By 1936 silent movies were well in the past but Chaplin felt that for his send off of his beloved mime, the Little Tramp, he needed to keep him inaudible.  But with all things Chaplin he broke that promise also when he staged the Tramp’s hilariously memorable nonsense song and dance number towards the end of the movie.  This scene alone, is worth the price of admission.

Charlie Chaplin, born in England in 1889, began his performing  career early in life, somewhere around the age of 10, working the London music halls and stages until he was 19. He came to America in the first decade of the 20th century and through his Little Tramp persona became one of the most recognizable men in the world. His movies on the surface were comedies but almost always contained a statement on the sufferings of the proletariat and fascism. His farce: the 1940 film, The Great Dictator, lampooned the German fascist while playing off the similarities between himself and Hitler; their small stature, silly mustache, and low birth. Loathing fascism, Chaplin, inexplicably was able to sympathize with communism, never realizing that the two were the opposite sides to the same coin.

Charlie Chaplin was married to 4 women and had 11 children.  His 3rd wife was the lovely and captivating, Paulette Goodard, whom he married in 1936. She co-starred with Chaplin in this movie and others including the above mentioned: The Great Dictator.  She is remembered mostly for these two films along with Cecil B. DeMille’s Reap the Wild Wind and So Proudly We Hail!, which she won an Academy Award for Best Supporting Actress.  To see Goodard, in this movie and others, is to fall in love with her.

Place this movie on your “Must See in My Lifetime” list.  A true Chaplin masterpiece.