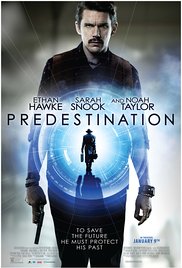 Directed by:  Michael and Peter Spierig

Written by:  Michael and Peter Spierig (screenplay) Robert A. Heinlein (story- All You Zombies)

Music by:  Michael and Peter Spierig

Ethan Hawke, temporal agent and bartender, must find and eliminate the Fizzle Bomber before he explodes one last devastating bomb that will take thousands of lives.

For the child of God, time is linear and unidirectional; we are born, we live, we die; the beginning, the middle and the end are all planned out except you can choose what to do with God’s offered grace.  Predestination, the doctrine, the outcome is a certainty; Predestination, the movie, the outcome is in doubt.  For predestination versus free will, the doctrine, is not a contradiction because, for God, time is immaterial, all moments are present in their immediacy. For predestination versus free will, in this movie, it is not a contradiction because time is circular and the protagonist can Keep On Keeping On until he selects good over evil, death over life (Live Die Repeat and Groundhog Day).

The Spierig brothers are identical twins born in Germany, living and working in Australia, creating movies from the ground up.  They write, they direct, they produce, they create the music, but they don’t act. Predestination is their 3rd feature film.

Predestination is a faithful rendition of Heinlein’s All You Zombies with enough temporal displacement to develop a very twisted noodle. The movie provides enough clues that you should figure out the plot well before the end credits roll; but knowing the plot ending neither diminishes the fun nor un-scrambles your brain.

The directing, writing and acting are all superb, but the story is what puts it on my to watch again list.