The U.S. currently deploys 3 strategic bombers: the B-52 Stratofortress, the B-1B Lancer, and the B-2 Spirit. A new bomber is currently in development, the B-21 Raider.

The Boeing B-52 first flew in 1952, and became an active component of the U.S. Air Force in 1955. Eight variants of the bomber where built from 1954 to 1963, B-52A through B-52H, producing a total of 742 aircraft of which 58 are still active with 18 in reserve, and are assigned to either the Barksdale or Minot AFBs in Louisiana and North Dakota respectively.  The 8 jet engine, sub-sonic plane, flight capable from 300 to 50,000 feet, able to deploy nuclear or conventional weapons, flew combat missions in Vietnam, the Gulf Wars, Afghanistan, freedom of navigation flights over the South China Sea, and force exercises over the South Korean peninsula.  The plane is projected to be retired in 2040, almost 80 years after the last bomber was manufactured. 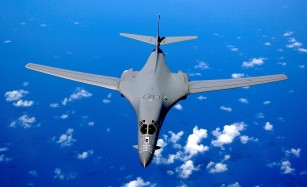 The Rockwell, now Boeing, B-1B first flew in 1974, and became operational in 1986, with 100 planes produced between 1983 and 1988, of which 62 are still in active service, are deployed mainly at Dyess AFB, Texas and Ellsworth AFB, South Dakota. The 4 engine supra-sonic jet, flight capable of operating from low levels up to 40,000 feet, was originally designed to deploy nuclear and conventional weapons, but since 1994 has carried only conventional weapons. The bomber has flown combat missions in the Gulf Wars, Kosovo, Libya, Syria, Afghanistan, and force exercises over the South Korean peninsula. The bomber is projected to serve into the 2030s, reaching their end of service life around 2045.

The Northrop Grumman B-2, made its maiden flight in 1989, and was placed in service in 1997, with only 21 manufactured due to its high per plane cost, and 20 are currently in active service, deployed at Whitman AFB, Missouri and Edwards AFB, California. The 4 engine sub-sonic jet, flight capable from low altitudes to 50,000 feet, is a strategic stealth bomber, able to deploy nuclear and conventional weapons.  The bomber flew combat missions in Kosovo, the Gulf Wars, Afghanistan, Libya, and force exercises over the South Korean peninsula.

Northrop Grumman was awarded a development contract for a new long-range, strategic stealth bomber, the B-21 Raider, in 2015. The USAF’s current plans call for the acquisition of 100 to 200 bombers, with a highly dubious operational service date of 2025; replacing and retiring all current B-52s, possibly all B-1Bs, and complimenting the existing fleet of B-2s. Program details are very limited but it currently is envisioned as a more stealthier B-2, with conventional and nuclear capabilities.