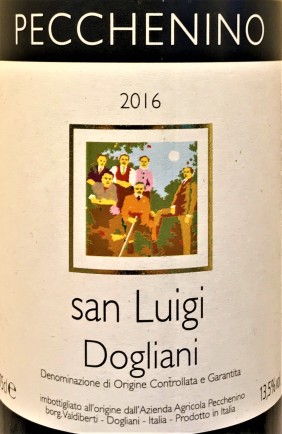 The Pecchenino wine estate has been passed from father to son since the late 18th century. The estate, since the 1970s, has tripled in size and now encompasses approximately 62 acres northeast of the commune of Dogliani, a small town of about 5000 people, which is  less than 40 miles southeast of Turin.  The estate has 70% of its acreage planted in Dolcetto vines with the remaining 30% dedicated to their better known cousins: Barbera, Nebbiolo, Chardonnay and Sauvignon Blanc.

The Dolcetto, known in area since at least the early 1400s, is a cool weather, dark-skinned grape with high tannin levels but low acidity, necessitating an early consumption since it will not age well in the bottle much beyond 4 or 5 years. This is not catastrophic, actually just the opposite, since the 2016 vintage is a nice wine to drink right now while you wait for the regions Barbera and Nebbiolo wines to age for 3-5 years.

The Pecchenino soils consist of unconsolidated calcareous alluvium, somewhat fertile but lacking in substantial organics. The vines are perched at an altitude of 1275-1400 feet above sea level, with a generally southern exposure.  Temperatures range from the low 80s during the growing season days to the mid 50s at night.  Rain amounts of 1-3 inches per month are typical.  October is the wettest month with up 3.5 inches expected and July is the driest with an average rainfall of a little more than 1 inch.

A brilliant, medium colored red wine with fruity and earthy aromas. Nice tannins and not too dry, producing a pleasant and satisfying finish. Serves well with, and not trying to be cliché, pizza and pasta.

An outstanding wine. Decant and aerate for at least one hour.