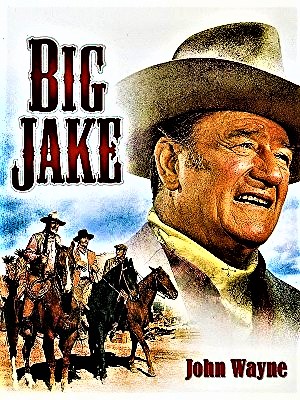 Little Jake (Ethan Wayne), Big Jake’s (John Wayne) grandson, is kidnapped from the family ranch by a ruthless gang of cutthroats who take the boy across the border from Arizona into Mexico. They will not release the boy until the family delivers a $1,000,000 ransom to them in the dusty deserts of Mexico. Martha McCandles (O’Hara), Big Jake’s estranged wife, manages the ranch while her husband, who has deserted her, travels the west with his redundantly named dog; she calls him home to perform the “harsh and unpleasant business” of bringing the boy back to the family.

George Sherman spent his life in film, starting in the mail room of Warner Brothers and eventually working his way up to director of almost exclusively ‘B’ movies, primarily westerns.  He directed John Wayne in a series of low-budget and forgotten westerns in the 1938 and 1939; a period in John Wayne’s career where he was clawing his way back to stardom after a 1931 run-in with Columbia boss Harry Cohn.  John Wayne never forgot. Sherman only danced in the big time twice. He directed Wayne in Big Jake although he fell ill during filming and John Wayne filled in for him but didn’t take any screen credit for it. He also produced Wayne in the 1961 western, Comancheros.  Sherman earned a reputation of making something out of nothing in his low-budget films; creating motion cantatas of cowboys doing what cowboys do, jumping on horses, riding horses, jumping off horses.  In Big Jake he gives his cinematographer, William H. Clothier, free rein to film the majestic Sonoran Desert panoramas along with superbly and convincingly constructing a story that straddles the fading west as it melts into the modern world of 1909.

John Wayne and Maureen O’Hara reprise their, can’t live with ’em, can’t live without ’em roles, that they so charmingly put together in the 1963 comedy, McLintock!. The charm and laughs are still there but this time Big Jake is a tad meaner.  He is still a gentleman but he can be down right ornery and lethal when needed and in this story, it’s needed.  O’Hara is a true treasure in the Hollywood of days gone by and in this movie she proves why. She is absorbing and natural but there is not enough of her. Her part ends after the opening scenes.  It’s a shame they couldn’t find a way to keep her in through the end. Richard Boone, as bad guy John Fain, upholds his part with a performance that has you believing that he is truly a dastardly beast.

Big Jake is a friends and family affair. Wayne’s friends and family are thick in the making of this movie. They direct, produce and act. Wayne pays his debts and provides avenues for the up and coming just as John Ford and others did for him in the past.  Wayne also makes this a movie of morals and putting the pieces of his broken family back together again.  Another fine, although not great, John Wayne western that you should watch more than once.