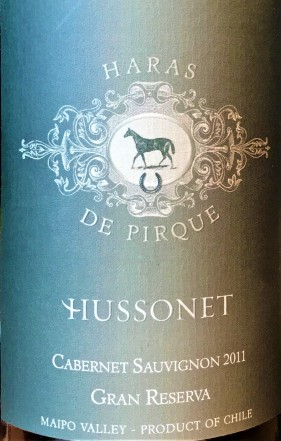 Eduardo Matte in 1991 purchased an estate he later named Haras de Pirque, a term derived from the combination of a name for a 1892 thoroughbred stud: Haras; which also is the French term for stud farm, and the Chilean commune name for the area: Pirque.  The estate is less than 20 miles southeast from the center of Santiago, Chile in the Maipo Valley and a little over 20 miles east of the Andes Mountain’s year-round snow fields. The estate, eventually growing to encompass approximately 1500 acres, lies on the western edge of a peripheral, Miocene-Pliocene aged, Andes’ thrust fault and has almost 250 acres devoted to growing Cabernet Sauvignon, Merlot, Carmenere, Chardonnay, and Sauvignon Blanc grapes. The remainder of the estate is dedicated to raising horses for racing and show. The Hussonet name comes from a famous eponymous American-Chilean stud, whose offspring have achieved some success as race horses in Chile and Australia.

The vineyards and winery, beginning in 2003, were originally a 50-50 joint venture with the Italian company, Marchesi Antinori, and their first wine was a Bordeaux red blend under the Albis label.  The Hussonet label followed a few years later.

The Antinori family, an ancient clan believing they can trace their blood lines back to the 11th century BC city of Troy, and their winemaking, a more persuasively detailed chronicle, dating back to at least the time of the Florentine Renaissance, bought out Matte’s share in the Harris de Pirque estate in mid-2017 and they plan extensive changes to the winery and vineyards to better reflect their name, which is synonymous with prestigious wines in general and Super Tuscans in particular.

Cabernet Sauvignon is a cross, believed to have occurred naturally sometime in the 1600s in France, between Cabernet Franc and Sauvignon Blanc grapes.  It is now the most widely planted grape in the world.  A thick-skinned grape that’s relatively easy to grow and maintain and it exhibits high tannins and acidity, along with cool climate grown aromas of peppers and currants.

The Haras de Pirque vineyards are located between 1800-2100′ above sea level on the west side of an outlier Andes series of foothills. The soils are clays and loams mixed with large alluvial and colluvial stones. Growing season temperatures have a diurnal range of approximately 50-85ºF and rainfall amounts average a very dry 0.5″ per month or less. During the southern hemisphere winters rainfall can exceed, but still dry, 2″ per month.

There is no useful information available, that I can find, on the actual details of making of this wine.

The wine has ruby-red to purple color with a garnet rim. A bouquet of black currants, pepper, and a hint of vanilla. On the palate the wine is full-bodied, rich in tannins, but slightly drier and more acidic than usual for a Cabernet Sauvignon. The finish is short to medium.

A good wine at a fair price. Pair with a snack of hard cheese and salami.  Not a great wine to add to the menu for an expensive or fancy beef meal. Drink now, but should last until 2021.  Decant and aerate for one hour before drinking.