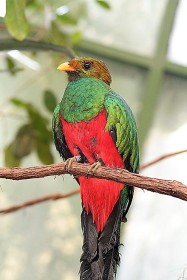 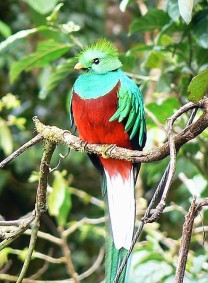 Quetzals are large colorful birds with iridescent feathers, usually found in the humid highlands from northern South America and southern North America. There are 6 species in 2 genera within the family Trogonidae. They eat fruits, berries, insects and an occasional frog or lizard. The picture to the left is of a golden headed quetzal.

The resplendent quetzal, picture of a male to the right, is the national bird of Guatemala and the Guatemalan currency is also named the quetzal. It is considered one of the most beautiful birds in the western hemisphere. During mating season it will grow a twin tail feather train up to 3 feet in length.