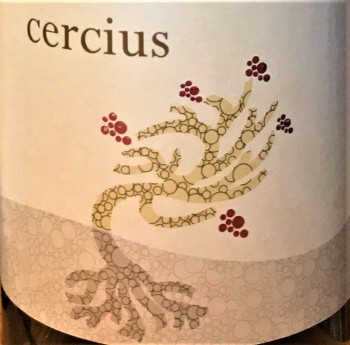 Cercius, from the Latin term for a wind between north and west, is a delightful vieilles vignes (old vine) Cotes du Rhone blend from the Plateau de Domazan, located about 8 miles west of the Avignon; the 14th century Papal seat which was then part of the Kingdom of Arles within the Holy Roman Empire.

Wine was likely grown and produced in the Rhone Valley as far back as the 6th century BC, believed to have been established by either the Greeks or Persians, with the vineyards and wineries maintained until the end of the Roman Empire in the late 5th century AD. It wasn’t until the late Middle Ages when the Avignon papacy re-established the Rhone area vineyards and wineries, mostly for their own use, beginning with Pope Clement V around 1309.  The rest, as they say, is history.

The 80-year-old plus vines are nurtured by clayey limestone soils topped with a layer of pebbles which contend with blustery, northwest winds, traveling over and down the 6000 foot peaks and slopes of the Central Massif, blowing into the  Michel Gassier’s Rhone Valley vineyards, proudly defying Mother Nature’s blustery assault at 500 feet above sea level.  The growing season climate for the area provides for hot days above 80 degrees Fahrenheit and cool nights with temperatures dipping into the mid-40s to low 50s.  Rainfall averages 2.5-4 inches per month.

The wine exhibits a deep ruby-red color; a wonderful aroma of lilacs, violets and sweet fruits. It’s well-balanced and full-bodied and the finish is long and satisfying.

An outstanding wine. Decant and aerate for at least one hour.